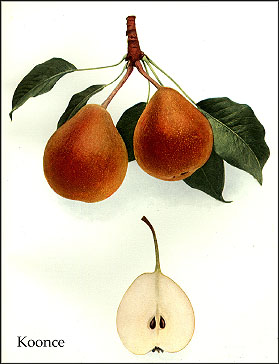 To whom it may concern,
I have written this page to share the story of the Koonce Pear. Below is what I know or understand about this once prolific pear that has quite nearly become extinct.

It would appear that sometime before the turn of the century, my great grandfather and name sake, Nicholas Koonce cultivated a pear in the towne of Villa Ridge, in Pulaski county Illinois. According to a report I found on the University of Illinois website, the pear was taken in 1893 by neighbors George Gould and sons to the World's Columbian Exposition in Chicago. There it was exhibited as a new fruit and "was pronounced by competent judges to be of good quality, and can surely be recommended for trial."

By 1921, when U. P. Hendrick published The Pears of New York, this variety appears to have grown to considerable acclaim. The full text of this book can be seen on the Cornell University website. The description of the Koonce pear is on page 183.

According to this book "The American Pomological Society added Koonce to its list of fruits in 1909". The book also states that "Koonce is a popular early variety grown rather commonly in nearly every pear region in the United States. It is listed by nearly all nurserymen".

The USDA Agricultural Research Service website also states that most of the cultivars listed in the book are growing in the gerplasm collection at the National Clonal Germplasm Repository (NCGR) in Corvallis, OR. However, correspondence with Mr. Joseph Postman, Plant Pathologist/Curator, USDA Agricultural Research Service, NCGR indicates that of roughly 80 or so important pears listed in The Pears of New York, the Koonce is among 16 cultivars not in their collection. Furthermore, their search has lead them to a specimen at the Brogdale Collection in England. The NCGR purchased some scionwood in the winter of 2007. In February of 2008 the specimine arrived at the U.S.D.A. quarantine station in Beltsville, Maryland where it is currently undergoing testing. If the testing continues to go well, it will be provisionally released in the spring of 2011 and those with the proper permit may propogate it until it is "fully" released.

In February of 2011, I heard from the quarantine station in Beltsville that the specimines have tested positive for Apple stem pitting virus. Upon inquiring as to the treatment options and prognosis, I received the following explanation.

The only treatment to get rid of this virus is therapy.   This accession , as well as others with this virus, will be treated, re-tested and,  if free of the virus, then will have the possibility of being released.  We do not release anything that has tested positive for the viruses we test for.   This might take a year, perhaps more.

We are doing therapy using meristem tissue culture ( in vitro)  and chemicals to try to eliminate the virus.  We also do heat treatments in vitro and in greenhouse.  We try all at the same time, to try to optimize the possibilities of getting a virus free plant for you. Sometimes it works, sometimes it does not.  This is a difficult virus to clean the material of, but not impossible.  We have accomplished it before and have gotten better at it, so hopefully, next time we test the treated material it will be negative.  We have molecular procedures we use to test for it when it is still in tissue culture. If we test it after treatment ( in culture) and it is negative, we graft the clean tissue and test the new tree again ( sometimes this virus shows up later).

Recently, January of 2012, I got an update from the quarantine station in Beltsville with good news and bad news.

I have some good news and some bad news....We put it through therapy and got rid of one virus, but it is still positive for a viroid (Pear blister canker viroid). I have requested from our tissue culture specialist to please give it priority among the many accessions we have to put trough therapy in order to attempt to get rid of the viroid within the next round of therapy. Viroids are harder to eliminate.

It went on like this for about 9 years. I'd check in annually and get an update but the Koonce Pear had more than it's share of bad luck... until the spring of 2019, when I finally got some good news!

It has been a few years since we corresponded, and I hope this email address is still good. You will be interested to know that the 'Koonce' pear has finally been (provisionally) released from quarantine and I received scionwood from Beltsville a few days ago. We grafted some trees and if the grafts are successful I hope to have it established in the germplasm orchard here in Corvallis in short order. I have a permit to receive "Provisional" quarantine releases, which allows me to establish trees, but I am not allowed to further distribute scions until a "full" release is granted.

Will keep you posted.

It is now February of 2020 and I have again received encouraging news from Mr. Postman, who has also informed me that while he has retired, he still volunteers at the Germplasm Repository.

I checked on the 'Koonce' pear trees at the Germplasm Repository yesterday, and am happy to report that there are two small trees successfully established in the greenhouse. Hopefully one will be large enough for field planting next fall. I also emailed Oscar at the quarantine center for an update on the status there.

We continue to wait and hope for the best.